What on Earth?: 100 of Our Planet's Most Amazing New Species (Paperback) 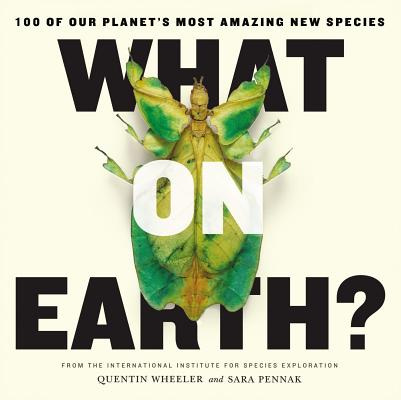 What on Earth?: 100 of Our Planet's Most Amazing New Species (Paperback)


Send us an inquiry for availability information on this title!
A chameleon so tiny it can fit on your thumbnail? A spider named after David Bowie? A fungus that turns ants into zombies? What on Earth?

What on Earth? is a compendium of the 100 coolest, weirdest, and most intriguing new species of this century as determined by the International Institute for Species Exploration. From animals to plants, fossils to bacteria, What on Earth? is an accessible, informative, and offbeat look at the creatures that also call our planet home, including:
• A dangerous cobra that can spit its venom almost ten feet
• A miniscule orchid that is less than a half-inch wide
• A rainforest mushroom named after the cartoon character Spongebob Squarepants
• A beautiful seahorse that changes colors to protect itself from predators
• A stick insect that is as long as a man’s arm

Featuring visually striking images alongside surprising facts about each new species, What on Earth? is a testament to the incredible and ever-evolving diversity of our planet.
Quentin Wheeler is a longtime professor of entomology and founder of the International Institute for Species Exploration.
Sara Pennak manages the Institute’s reports and public outreach activities. Both authors live in Arizona.