Up From Slavery (Mass Market) 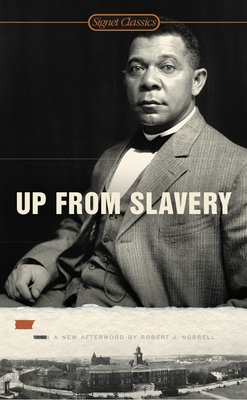 Up From Slavery (Mass Market)


Not On Our Shelves, Warehouse ships in 1-5 Days
The dramatic autobiographical account of Booker T. Washington’s unique American experience—a struggle against social and ideological bias that he began as a slave and never stopped.

“Washington’s story of himself, as half-seen by himself, is one of America’s most revealing books.”—Langston Hughes

Historically acknowledged as one of America’s most powerful and persuasive orators, Booker T. Washington consistently challenged the forces of racial prejudice at a time when such behavior from a black man was unheard of. While his stance on the separation of the races would become controversial, he worked tirelessly to convince blacks to work together as one people in order to improve their lives and the future of their race.

Spanning from his fight for education through his founding of the world-renowned Tuskegee Institute, Washington’s Up from Slavery remains one of the most significant and defining works in American literature.
Booker T. Washington (1856-1915) was born a slave on a Virginia farm. Later freed, he headed and developed the Tuskegee Institute and became a leader in education. Widely considered a spokesman for his people, he emphasized social concern in three books as well as his autobiography.

Ishmael Reed is one of America's most renowned African-American writers. He is the author of plays, poetry and novels, including Japanese by Spring. He lives in Oakland, California.