A Colony in a Nation (Paperback) 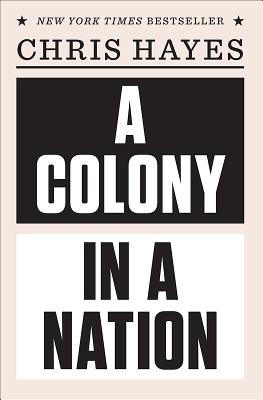 A Colony in a Nation (Paperback)

"An essential and groundbreaking text in the effort to understand how American criminal justice went so badly awry." —Ta-Nehisi Coates, author of Between the World and Me

In A Colony in a Nation, New York Times best-selling author and Emmy Award–winning news anchor Chris Hayes upends the national conversation on policing and democracy. Drawing on wide-ranging historical, social, and political analysis, as well as deeply personal experiences with law enforcement, Hayes contends that our country has fractured in two: the Colony and the Nation. In the Nation, the law is venerated. In the Colony, fear and order undermine civil rights. With great empathy, Hayes seeks to understand this systemic divide, examining its ties to racial inequality, the omnipresent threat of guns, and the dangerous and unfortunate results of choices made by fear.

Chris Hayes is the Emmy Award–winning host of All In with Chris Hayes on MSNBC, the New York Times best-selling author of Twilight of the Elites, and an editor-at-large at The Nation. He lives in Brooklyn, New York, with his wife and children.
Hayes’s forceful analysis…compel[s] readers to wrestle with some very tough questions about the nature of American democracy.
— Khalil Gibran Muhammad - New York Times Book Review

[Hayes is] the young left’s most erudite and urgent interpreter.
— Rachel Maddow

A Colony in a Nation is a highly original analysis of America’s arbitrary and erratic criminal justice system. Indeed, by Hayes’s lights, the system is not erratic at all—it treats one group of Americans as citizens, and another as the colonized. This is an essential and groundbreaking text in the effort to understand how American criminal justice went so badly awry.

— Ta-Nehisi Coates, author of Between the World and Me

A timely and impassioned argument for social justice.
— Kirkus Reviews

This readable and thoughtful work will appeal to readers interested in civil rights and criminal justice, and is especially insightful.
— William D. Pederson - Library Journal

Important, persuasive.…[A Colony in a Nation] can help Americans begin to heal.