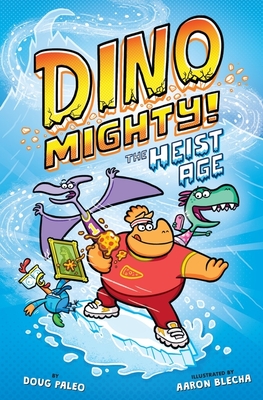 This is book number 2 in the Dinomighty! series.

Dinotown is frozen! How will the Dinomighties fight Bully Mammoth and save the most precious painting in the world? This wildly funny, action-packed graphic novel is perfect for fans of Dog Man, Investigators, and Real Pigeons.

Dinotown is under attack! In this adventure, the Dinomighties face new icy villains led by Bully Mammoth. This colossal meanie will stop at nothing to ​get his grubby tusks on the world's most valuable painting: the Dino Lisa . . . even if it means putting a deep freeze on Dinotown. How will the Dinomighties heat things up in order to outsmart and ice out Bully and his big bad crew of furry doofs and manage to save their hometown along with the most precious piece of art in the whole wide world?

Readers of the Dog Man, Hilo, Investigators, and The Bad Guys series will love the outrageous and zany humor paired with the action-packed adventure in this exciting graphic novel series.
Doug Paleo is a dino-mite author of hilarious books for young readers. Stone is his preferred medium for etching graphic novel scripts. In his free time, he enjoys cave painting, going on long hikes to gather wild berries, and open-fire cooking.


Aaron Blecha is an artist and author who illustrates humorous books for children, including George Brown, Class Clown; Shark School; Dino Wars; and the Our Principal series. Originally from Green Bay, Wisconsin, Aaron graduated from the University of Wisconsin with a Bachelor of Fine Arts in 1997. Before moving to London in 2007, Blecha worked as an animator and character designer in the animation and toy industries in California. Today, he works as a freelance illustrator and lives with his family in Brighton and Hove on the south coast of England.