Security and Conservation: The Politics of the Illegal Wildlife Trade (Hardcover) 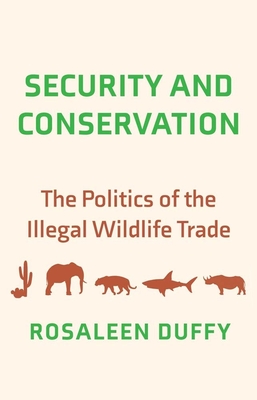 Security and Conservation: The Politics of the Illegal Wildlife Trade (Hardcover)


Not On Our Shelves, Warehouse ships in 1-5 Days
An exploration of the scale, practical reality, and future implications of the growing integration of biodiversity conservation with global security concerns

“Offers a thorough overview of an aspect of conservation that has become increasingly important but often unfortunately fails to make the nightly news.”—Well-Read Naturalist

Debates regarding environmental security risks have generally focused on climate change and geopolitical water conflicts. Biodiversity conservation, however, is increasingly identified as a critical contributor to national and global security. The illegal wildlife trade is often articulated as a driver of biodiversity losses, and as a source of finance for organized crime networks, armed groups, and even terrorist networks. Conservationists, international organizations, and national governments have raised concerns about “convergence” of wildlife trafficking with other serious offenses, including theft, fraud, corruption, drugs and human trafficking, counterfeiting, firearms smuggling, and money laundering.

In Security and Conservation, Rosaleen Duffy examines the scale, practical reality, and future implications of the growing integration of biodiversity conservation with global security concerns. Duffy takes a political ecology approach to develop a deeper understanding of how and why wildlife conservation turned toward security‑oriented approaches to tackle the illegal wildlife trade.
Rosaleen Duffy is professor of international politics at the University of Sheffield. She is the author of Nature Crime: How We're Getting Conservation Wrong.
“The book offers a thorough overview of an aspect of conservation that has become increasingly important but often unfortunately fails to make the nightly news.”—Well-Read Naturalist

“There are few keener observers of international biodiversity conservation than Rosaleen Duffy. With a ferocity of purpose, she investigates the tenuous connections and nuances among illegal wildlife trade, terrorism threats, and national security.”—Steven R. Brechin, Rutgers University, New Brunswick

“Rosaleen Duffy provides a timely critical reflection on how the illegal wildlife trade facilitates the convergence of conservation and security strategies, resulting in a new and worrying set of conservation practices.”—Maano Ramutsindela, Lead Editor of The Violence of Conservation in Africa


“Rosaleen Duffy robustly and eloquently evidences the complex interplay of protecting wildlife. This book is a must-read to understand the securitization and militarization of conservation and its unintended consequences.”—Tanya Wyatt, author of Wildlife Trafficking: A Deconstruction of the Crime, Victims, and Offenders

“A groundbreaking critique of the recent ‘securitization’ of the illegal wildlife trade – one that pushes us beyond black-and-white narratives toward more just, ethical, and decolonial conservation futures.”—Liana Chua, University of Cambridge /The Global Lives of the Orangutan project

“This is a necessary read for critical times: a brilliant analysis of the securitization of wildlife conservation, and an urgent reminder of the structural conditions that brought us here.”—Diana Ojeda, Universidad de los Andes