Against the Grain: A Deep History of the Earliest States (Hardcover) 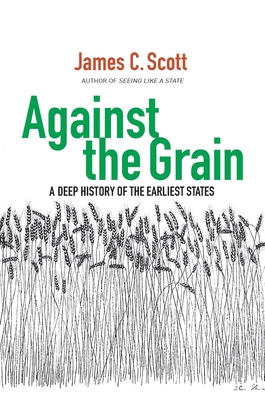 Against the Grain: A Deep History of the Earliest States (Hardcover)


Send us an inquiry for availability information on this title!
An Economist Best History Book 2017

“History as it should be written.”—Barry Cunliffe, Guardian

“Scott hits the nail squarely on the head by exposing the staggering price our ancestors paid for civilization and political order.”—Walter Scheidel, Financial Times

Why did humans abandon hunting and gathering for sedentary communities dependent on livestock and cereal grains, and governed by precursors of today’s states? Most people believe that plant and animal domestication allowed humans, finally, to settle down and form agricultural villages, towns, and states, which made possible civilization, law, public order, and a presumably secure way of living. But archaeological and historical evidence challenges this narrative. The first agrarian states, says James C. Scott, were born of accumulations of domestications: first fire, then plants, livestock, subjects of the state, captives, and finally women in the patriarchal family—all of which can be viewed as a way of gaining control over reproduction.

Scott explores why we avoided sedentism and plow agriculture, the advantages of mobile subsistence, the unforeseeable disease epidemics arising from crowding plants, animals, and grain, and why all early states are based on millets and cereal grains and unfree labor. He also discusses the “barbarians” who long evaded state control, as a way of understanding continuing tension between states and nonsubject peoples.
James C. Scott is Sterling Professor of Political Science and codirector of the Agrarian Studies Program at Yale University.
“[Scott’s work] has focussed on a skeptical, peasant’s-eye view of state formation. . . . His best-known book, Seeing Like a State, has become a touchstone for political scientists, and amounts to a blistering critique of central planning and ‘high modernism.’ . . . Scott’s new book extends these ideas into the deep past, and draws on existing research to argue that ours is not a story of linear progress, that the time line is much more complicated, and that the causal sequences of the standard version are wrong.”—John Lanchester, New Yorker

“Against the Grain delivers not only a darker story but also a broad understanding of the forces that shaped the formation of states and why they collapsed — right up to the industrial age . . . an excellent book.”—Ben Collyer, New Scientist

“Scott offers an alternative to the conventional narrative that is altogether more fascinating, not least in the way it omits any self-congratulation about human achievement. His account of the deep past doesn’t purport to be definitive, but it is surely more accurate than the one we are used to.”—Steven Mithen, London Review of Books

“Forget the Paleo Diet: Scott goes all the way in showing how early nomadic peoples in the Fertile Crescent were fitter, happier and more productive than the semi-enslaved ziggurat-builders of the ancient Mesopotamian cities.”—James Whipple (M.E.S.H), Frieze

“This is an important book, which should be read by every educated person. The story it tells is so different, so opposed, to the received narrative it deserves to be everywhere known. Scott’s presentation of evidence is so complete that the received narrative simply can no longer stand. Additionally, Scott writes extremely well: a clear, unambiguous, approachable style, with occasional sparkles of gentle humour to ease the way. The book is an intellectual delight.”—George Gale, Metascience

“Scott’s original book is history as it should be written” — Barry Cunliffe, Guardian

“James C. Scott's oeuvre is among the most important in contemporary political theory. Against the Grain is a significant addition to it, as Scott issues the challenge of an anti-authoritarian approach to our political origins” —Crispin Sartwell, Times Literary Supplement

“History as it should be written—an analysis of the deep forces exposed to the eternal conflict between humans and their environment. What makes it even more welcome is that it has been written with the enthusiasm of discovery.”—Barry Cunliffe, Guardian

“Written with great enthusiasm and characteristic flair . . . Scott hits the nail squarely on the head by exposing the staggering price our ancestors paid for civilisation and political order.”—Walter Scheidel, Financial Times

“The most interesting non-fiction read of the year. . . . Urgently recommended, and fun to read as well.”—Tyler Cowen, Marginal Revolution

“Fascinating. . . . Our agrarian-biased view of history, Scott concludes, could use some reworking. Most of the world’s early human populations likely enjoyed semisettled, semiagrarian lives beyond the state’s grasp.”—Suzanne Shablovsky, Science

“Fascinating. . . . Thinkers like Scott remind us that who we thought we are might not necessarily be the case. Such knowledge is empowering.”—Derek Beres, Big Think

“[Against the Grain] presents a comprehensive and convincing case that the transition from hunter-gatherer nomadism to permanent, agriculturally dependent settlements was a complete disaster for humankind. . . . Whatever your political leanings, the implications of Scott’s book are as fascinating as they are wide-ranging.”—Will Collins, The American Conservative

“James C. Scott [is] an eminent and iconoclastic political scientist. . . . In his rich and varied career, Scott has found many ways to second-guess structures that prop up the powerful. . . . Although Against the Grain is not a large book, it is a kind of thematic summa of Scott’s work so far, as it reworks the entire canvas of history by reconsidering its origins through the lens of state-formation.”—Jedediah Purdy, The New Republic

“One of those rare books that really changes your worldview — or somehow crystallizes where your mind has been trending.”—Andrew Sullivan, Daily Intelligencer, New York Magazine

“For more than 40 years, James Scott has written about those who resist being incorporated into political-economic systems. . . . In a provocative new book, Against the Grain, Scott now challenges us to rethink legends about the state and its origins.”—Jacob Levy, Reason

“The story of a complex pattern of grain agriculture, early states, forced labor, and the extraction of surplus, and how all of these things were connected in ways that researchers previously never suspected. . . Scott is a writer of extraordinary talent. . . . The constant interplay between the present and the distant past is one of the most appealing aspects of this book.”—Jason Kuznicki, Cato Journal

“Extremely well written and informative. . . . A very important and original contribution to the growing literature on the political economy of the state.”—Ennio E. Piano, Public Choice

“Against the Grain . . . is bound to shape how we think about this topic for years to come.”—Johann Strube, Agriculture and Human Values

"Scott's book brilliantly delivers on the promises it makes . . . and will hopefully find its proper place as required reading on all syllabi introducing students to the politics and history of state formation and political regimes."—Diana Kim, Governance

"This concise, useful, and opinionated book is a critical overview of early state formation in Mesopotamia. . . . [It] offers a stimulating perspective."—Roger L. Albin, Journal of World History

“Scott’s research is extraordinarily meticulous and detailed, and the lives of his imagined first citizens are unlike anything existing today. . . . Against the Grain deserves a wide readership. It has made me look afresh at the urban world.”—Tim Flannery, New York Review of Books

Finalist for the 2018 CT Book Award

“A sweeping and provocative look at the 'rise of civilization,' focusing particularly on those parts, peoples, and issues that are normally overlooked in conventional historical narratives.”—Alison Betts, The University of Sydney

“This book is fascinating and original, containing a lesson on every page. Brilliant. James Scott is a legend."—Tim Harford, author of Messy and The Undercover Economist

"Scott is at his most intellectually omnivorous in Against the Grain, drawing on a vast array of sources to upend our basic assumptions about state formation and civilization."—Edward D. Melillo, author of Strangers on Familiar Soil: Rediscovering the Chile-California Connection

“Against the Grain is not just a “counternarrative,” an outsider’s skeptical reaction to received wisdom about the evolution of agricultural systems and the first states in Mesopotamia. Vainglorious kings with their generals and armies, sycophantic scribes, and royal architects and engineers are not Scott’s heroes. His concerns are with urban laborers, peasants, and barbarians and the cleavage planes of resistance to rulers. Those studying Mesopotamia—and other early states—take heed.”—Norman Yoffee, editor of Early Cities in Comparative Perspective

“A contemporary master of the political counter-narrative has produced a book on the origins of civilization – this is, quite simply, a must-read.”—David Wengrow, author of What Makes Civilization?