Buried Beneath the City: An Archaeological History of New York (Paperback) 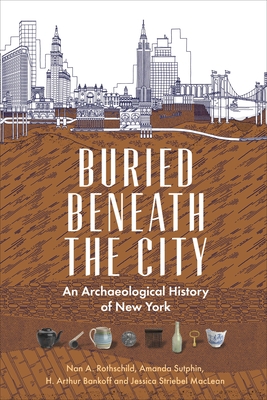 Buried Beneath the City: An Archaeological History of New York (Paperback)


Send us an inquiry for availability information on this title!
Bits and pieces of the lives led long before the age of skyscrapers are scattered throughout New York City, found in backyards, construction sites, street beds, and parks. Pottery shards dating to 600 CE, wine jugs from the Dutch taverns around City Hall, a child's shoe from the Black settlement in Central Park called Seneca Village, raspberry and rhododendron seeds sown in backyard Brooklyn gardens--these everyday objects are windows into the city's forgotten history. Buried Beneath the City uses urban archaeology to retell the history of New York, from the deeper layers of the past to the topsoil of recent history. The book explores the ever-evolving city and the day-to-day world of its residents through artifacts, from the first traces of Indigenous societies more than ten thousand years ago to the detritus of Dutch and English colonization and through to the burgeoning city's transformation into the modern metropolis. It demonstrates how the archaeological record goes beyond written history by preserving mundane things--details of everyday life that are beneath the notice of the documentary record. These artifacts reveal the density, diversity, and creativity of a city perpetually tearing up its foundations to rebuild itself. Lavishly illustrated with images of objects excavated in the city, Buried Beneath the City is at once an archaeological history of New York City and an introduction to urban archaeology.
Nan A. Rothschild is an urban social archaeologist who was Ann Whitney Olin Professor of Anthropology at Barnard College and is adjunct professor at Columbia University. Amanda Sutphin is the director of archaeology at the New York City Landmarks Preservation Commission and manages the NYC Archaeological Repository: The Nan A. Rothschild Research Center. H. Arthur Bankoff is a professor in the Department of Anthropology at Brooklyn College, City University of New York. Jessica Striebel MacLean is an urban archaeologist at the New York City Landmarks Preservation Commission and the NYC Archaeological Repository as well as an adjunct professor in the Department of Anthropology at Columbia University.