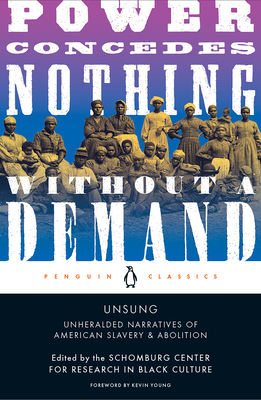 
Not On Our Shelves, Warehouse ships in 1-5 Days
A new historical anthology from transatlantic slavery to the Reconstruction curated by the Schomburg Center, that makes the case for focusing on the histories of Black people as agents and architects of their own lives and ultimate liberation, with a foreword by Kevin Young

This is the first Penguin Classics anthology published in partnership with the Schomburg Center, a world-renowned cultural institution documenting black life in America and worldwide. A historic branch of NYPL located in Harlem, the Schomburg holds one of the world's premiere collections of slavery material within the Lapidus Center for Historical Analysis of Transatlantic Slavery. Unsung will place well-known documents by abolitionists alongside lesser-known life stories and overlooked or previously uncelebrated accounts of the everyday lives and activism that were central in the slavery era, but that are mostly excised from today's master accounts. Unsung will also highlight related titles from founder Arturo Schomburg's initial collection: rare histories and first-person narratives about slavery that assisted his generation in understanding the roots of their contemporary social struggles. Unsung will draw from the Schomburg's rich holdings in order to lead a dynamic discussion of slavery, rebellion, resistance, and anti-slavery protest in the United States.
Michelle Commander is Associate Director and Curator of the Lapidus Center.

Kevin Young is Director of the Schomburg Center and Poetry Editor for the New Yorker. His most recent book of poetry, Brown, and his nonfiction book Bunk, were both named New York Times Notable Books and longlisted for the National Book Award. Bunk was also a finalist for the National Book Critics Circle Award.

“As comprehensive a collection as now exists and one that should be required reading in history and literature courses.”
—Kirkus, starred review

“Remarkable anthology...As a whole, this collection showcases the vastness of Black thinking and writing, and nicely complements works by Martha S. Jones and Stephanie E. Jones-Rogers. Complete with a list of suggestions for further reading, this winning anthology is a must for all interested in Black history, but unsure where to start.”
—Library Journal, starred review

“The song sung in these pages is not solely an aria to agency or a tragic chorus about limits; it is both. It perseveres in the mission described in Arturo Schomburg’s 'The Negro Digs Up His Past' as excavating history to 'restore what slavery took away.' It shouts against the silencing alluded to in the Unsung title. Like the Harlem Renaissance and the Schomburg Center, Unsung is a work of both history and art.”
—Washington Post