The Portable Malcolm X Reader: A Man Who Stands for Nothing Will Fall for Anything (Paperback) 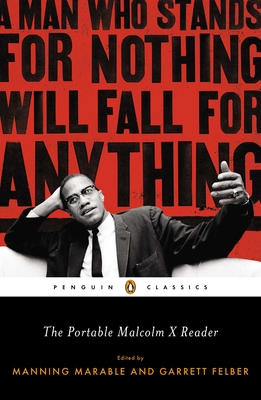 The Portable Malcolm X Reader: A Man Who Stands for Nothing Will Fall for Anything (Paperback)


Not On Our Shelves, Warehouse ships in 1-5 Days
A look at Malcolm X's life and times from his Pulitzer Prize–winning biographer, Manning Marable

Manning Marable's Pulitzer Prize–winning biography, Malcolm X: A Life of Reinvention, has reshaped perceptions of one of America's great revolutionary thinkers. This volume, the first collection of major documents addressing Malcolm X in decades, features never-before-published material, including articles from major newspapers and underground presses, oral histories, police reports, and FBI files, to shine a brighter light on Malcolm's life and times. Conceived as both a companion to the biography and a standalone volume, and assembled by Marable and his key researcher, Garrett Felber, prior to Marable's untimely death, The Portable Malcolm X Reader presents an invaluable portrait of Malcolm X.

For more than seventy years, Penguin has been the leading publisher of classic literature in the English-speaking world. With more than 1,700 titles, Penguin Classics represents a global bookshelf of the best works throughout history and across genres and disciplines. Readers trust the series to provide authoritative texts enhanced by introductions and notes by distinguished scholars and contemporary authors, as well as up-to-date translations by award-winning translators.
Manning Marable (1950–2011) was the founding director of African American studies at Columbia University and the director of Columbia's Center for Contemporary Black History. He is the author of fifteen books and was the editor of the quarterly journal Souls.

Garrett Felber is a Ph.D. student in American culture at the University of Michigan. He holds a master's in African American studies from Columbia University, where he worked as lead researcher of the Malcolm X Project with Manning Marable.