Mariel of Redwall: A Tale from Redwall (Paperback) 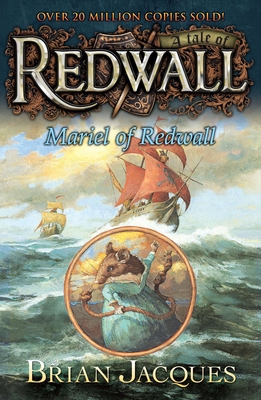 Mariel of Redwall: A Tale from Redwall (Paperback)

This is book number 4 in the Redwall series.

The Redwall series is soon to be a Netflix original movie!

The bestselling Redwall saga continues with Mariel of Redwall.

When the rat pirate Gabool the Wild attacks the mouse-ship carrying Joseph the Bellmaker, he plunders its magnificent bell in a fit of greed, and then pitilessly casts Joseph and his daughter Mariel into the raging sea. After she is rescued and brought to Redwall Abbey, Mariel sets out with three fearless Mossflower companions (and her trusty rope-weapon, the Gullwhacker) to track down Gabool and avenge her father-and thus begins an unforgettable battle!

Perfect for fans of T. A. Barron’s Merlin saga, John Flanagan’s Ranger’s Apprentice series, and J. R. R. Tolkien’s Lord of the Rings series.
"I sometimes think it ironic for an ex-seaman, longshoreman, truck driver, policeman, bus driver, etc., to find success writing children's novels," says Brian Jacques (pronounced "Jakes"). Yet it is all too true. With the publication of his first children's book in 1987, the award-winning Redwall, Jacques' fresh talent has received exceptional praise from reviewers in the United States and England. Newbery Award winner Lloyd Alexander called it "a fine work, literate, witty, filled with the excitement of genuine storytelling. Young people will surely be captivated. I hope they give their elders a chance to share the delights."

A well-known radio personality in his native Liverpool--as well as an actor, stand-up comic, and playwright--Brian Jacques is the host of "Jakestown" on BBC Radio Merseyside. Ever the performer, Jacques is well-known for applying his acting and entertainment background to his lively presentations to legions of young fans at schools across the United States and England.

Brian Jacques was born in Liverpool, England on June 15th, 1939. Along with forty percent of the population of Liverpool, his ancestral roots are in Ireland, County Cork to be exact.

He grew up in the area around the Liverpool docks. His interest in adventure stories began at an early age with reading the books of: Daniel Defoe, Sir Henry Rider Haggard, Arthur Conan Doyle, Sir Thomas Malory, Robert Michael Ballantyne, Robert Louis Stevenson, Edgar Rice Burroughs, and Kenneth Grahame. He attended St. John's School, an inner city school that had its playground on the roof. On his first day at St. John's, at the age of ten, he had an experience that marked his potential as a writer. When given an assignment of writing a story about animals, he wrote about the bird that cleaned a crocodile's teeth. The teacher could not, and would not, believe that a ten year old could write that well. When young Brian refused to falsely say that he had copied the story, he was caned as "a liar". He had always loved to write, but it was only then, that he realized that he had a talent for writing.

Some teachers at St. John's proved to be good role models. As Mr. Jacques recalls:

"My favourite teacher was Mr. Austin Thomas. He looked like Lee Marvin. Big Man. A Captain in World War II. He came to school on a big bush bike with the haversack on back. He was a man's man. Always fair. I was fourteen at the time when Mr. Thomas introduced the class to poetry and Greek literature. (Because of him, I saved seven shillings and sixpence to buy The Iliad and The Odyssey at this dusty used book shop.)"

This interest in poetry extended to Wordsworth, Tennyson, and Goldsmith.It was also at St. John's that Brian met a teacher, Alan Durband (who also taught two Beatles, Paul McCartney and George Harrison), who, more than thirty years later would bring about a major change in his life.

After Brian finished school at fifteen, he set out to find adventure as a merchant seaman. He travelled to many far away ports, including New York, Valparaiso, San Francisco, and Yokohama. Tiring of the lonely life of a sailor, he returned to Liverpool where he worked as a railway fireman, a longshoreman, a long-distance truck driver, a bus driver, a boxer, a bobby (Police Constable 216D), a postmaster, and a stand-up comic.