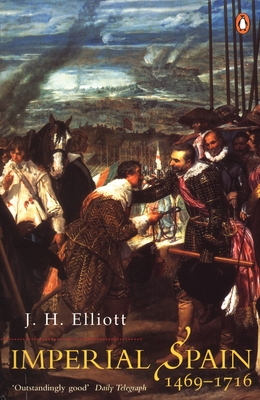 
Send us an inquiry for availability information on this title!
Since its first publication, J. H. Elliott's classic chronicle has become established as the most comprehensive, balanced, and accessible account of the dramatic rise and fall of imperial Spain.  Now with a new preface by the author, this brilliant study unveils how a barren, impoverished, and isolated country became the greatest power on earth—and just as quickly fell into decline.

At its greatest Spain was a master of Europe: its government was respected, its armies were feared, and its conquistadores carved out a vast empire. Yet this splendid power was rapidly to lose its impetus and creative dynamism. How did this happen in such a short space of time? Taking in rebellions, religious conflict and financial disaster, Elliott's masterly social and economic analysis studies the various factors that precipitated the end of an empire.

Sir John Huxtable Elliott is a British historian, a fellow of the British Academy, a Regius professor emeritus at Oxford University, and an honorary fellow of Oriel College, Oxford, and Trinity College, Cambridge. An expert on Spanish history, he is the author of more than a dozen books, including Imperial Spain: 1469–1716.
A major work on Spanish history (The Economist)"