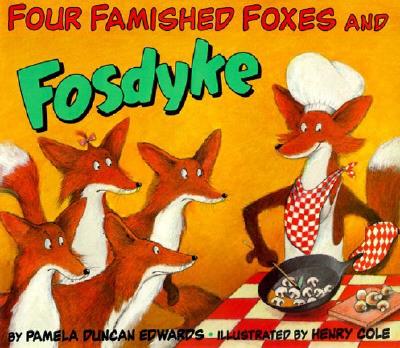 Four famished foxes make fun of their brother Fosdyke, who feels fondly for fried figs, fennel, and French bread. Leaving him behind to fry and flambé, they go foraging for fowl in a forbidden farmyard. Unfortunately, the foxes find the fowl forwarned. Foiled, they return to their den. Will they ever filch a fabulous farmyard feast? Or will they forgo fowl and finally admit that "a fox is a fox whatever the food"?

Pamela Duncan Edwards is the author of numerous popular picture books, including Livingstone Mouse; Roar! A Noisy Counting Book; Some Smug Slug; The Worrywarts; Clara Caterpillar; Wake-Up Kisses; Rosie's Roses; The Leprechaun's Gold; and Gigi and Lulu's Gigantic Fight, all illustrated by Henry Cole; as well as Dear Tooth Fairy, illustrated by Marie-Louise Fitzpatrick; McGillycuddy Could!, illustrated by Sue Porter; and The Neat Line, illustrated by Diana Cain Bluthenthal. She lives in Virginia.

Henry Cole was a celebrated science teacher for many years before turning his talents to children’s books. He has worked on nearly one hundred and fifty books for children, including Unspoken, Big Bug, A Nest for Celeste, Jack’s Garden, and On Meadowview Street. Henry loves being outside, where he can sketch and write. His favorite sound is the first robin song of the spring. You can visit him online at www.henrycole.net.