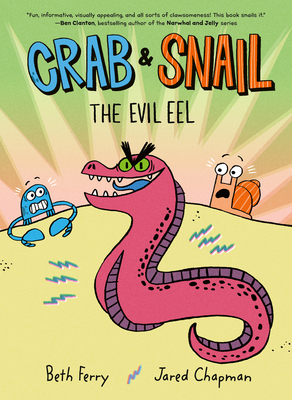 This is book number 3 in the Crab and Snail series.

The Evil Eel is so evil that making narwhals cry is one of her favorite hobbies. So evil in fact that just one sting turns friendly, sweet Snail into…Snevil!!!! Complete with a black cape, Snevil sets out to destroy everything in her path, including Crab. In order to save himself—and his best friend—Crab must become a hero. Will he be able to stop evil from destroying the splash zone before it's too late?

Crab and Snail are everyone’s new favorite characters in the graphic early reader space. Fans of Narwhal & Jelly and Beak & Ally will love these quirky characters and clever stories.

"A character-based volume that reads like a cross between SpongeBob SquarePants and The Muppet Show."—Publishers Weekly (starred review) for The Invisible Whale (Book One)